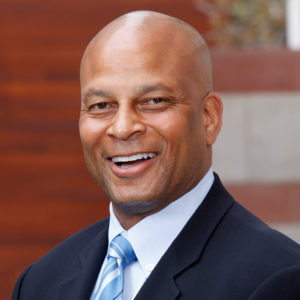 As ferocious and hard-hitting as he was on the football field during a celebrated collegiate and professional career, Ronnie Lott is equally warmhearted and compassionate in his role today as entrepreneur, businessman and philanthropist.

The combination of his unbelievable tenacity as a player and conscientious concern as a human being make Lott one of the seminal figures on the American sports scene.

Perhaps the greatest defensive back to ever play the game, Lott was given the highest honors at every level of participation – college All-American at USC, NFL All-Pro with the San Francisco 49ers, world champion, college and pro football Hall of Fame.
Ronnie was honored once again as the top defensive player in the 100-year history of the Pac-12 conference.

In 2004, Lott lent his name to the Lott IMPACT® Trophy, one of the nation’s most prestigious awards, given annually to the college student-athlete who makes the biggest IMPACT® on his team both on and off the field. To date, the Pacific Club IMPACT® Foundation has raised in excess of $1.4 million for numerous charities throughout California and the country.

At Eisenhower High School in Rialto, California, just a few miles from Riverside, Ronnie was a superb athlete, excelling at quarterback, wide receiver and safety on the football team (the high school field is now named after Lott).
John Robinson recruited Lott to USC where he was part of the fabled Trojan dynasty, starting on two Rose Bowl teams and a national championship team. Was captain of the 1980 team and a consensus All-American. The eighth choice in the NFL draft by the 49ers, Lott was an instant success. He started at cornerback his rookie season, intercepted seven passes and helped San Francisco win Super Bowl XVI, the first of four they would win during his tenure.

“He’s like a middle linebacker playing safety,” Hall of Fame coach Tom Landry once remarked. “He’s devastating. He may dominate the secondary better than anyone
I’ve seen.”

During his brilliant 14-year NFL career, Lott was named All- Pro eight times, intercepted 63 passes and was named to the 75th anniversary all-NFL team. He was elected to the Pro Football Hall of Fame in 2000. USA Today praised Ronnie as “one of the most successful athletes at making the transition to business.”

He now manages $2.4 billion in private-equity investments and owns both Toyota and Mercedes-Benz car dealerships. He also opened World Sports Cafe in Fresno, California. He also advises professional athletes who are making a transition to the business world.

In 1999, Ronnie, along with former 49er teammate Harris Barton, co-founded HRJ Capital, a private equity investment company. Lott is a managing partner of the firm that began with a $40 million fund, investing exclusively in the venture capital sector, but has evolved into a diversified global private equity investment platform with a series of funds focused on top performing venture capital, leveraged buy-out, distressed asset, real estate and hedge fund managers. Lott’s Toyota dealership has been awarded the prestigious Toyota President’s Award twice, for demonstrating a commitment to maintaining the highest standards for customer satisfaction.

In addition to the phenomenal success of the Lott IMPACT® Trophy, Ronnie is a man who believes in using his platform for others.

In 1989, he founded All-Stars Helping Kids, a nonprofit organization that pools the resources of world class athletes, corporations and individuals to promote a safe, healthy and rigorous learning environment for disadvantaged children in
low-income communities.

With Ronnie leading the way, All-Stars has distributed millions of dollars to non-profits throughout the Bay Area. Today, Ronnie lives in Cupertino with his wife, Karen.