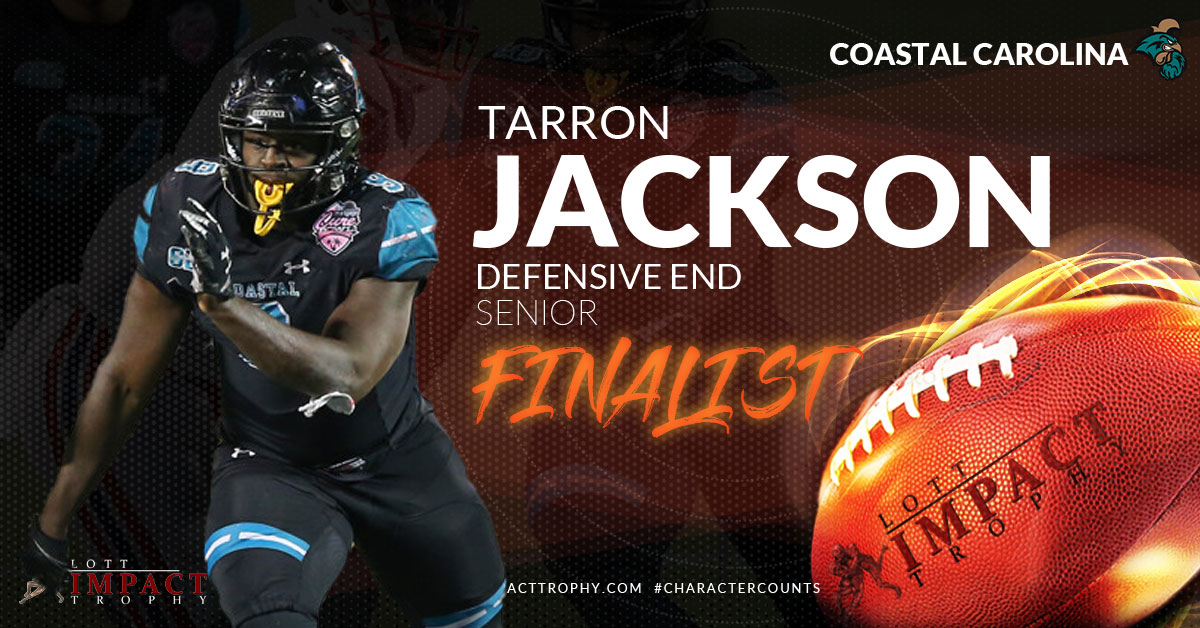 He has a degree in mathematics, so the numbers add up for him.

He is Tarron Jackson from Coastal Carolina, a defensive end with a big motor and an even bigger potential.

And the numbers tell him it’s time to leave Conway, Carolina and test the NFL where the numbers come with dollar signs.

A consensus All-American and Sun Belt Conference Defensive Player of the Year, Jackson, a 260-pound defensive end had a league high 14 tackles for loss and 8.5 sacs as Coastal surprised the college football world by winning its first 11 games before falling to Liberty in overtime. Still, they were ranked No. 12 in the country and certainly had people paying attention.

Jackson, who had been granted an additional year of eligibility (as all players were because of the pandemic) decided it was time to move on:

“This has been 5 of the best years of my life. The friends, memories, and lessons I have learned are priceless,” Jackson said. “To all my coaches at Coastal… you have been monumental in building me up into the person I am today and for that, I will be forever grateful. With that being said, I would like to announce that I will be declaring for the 2021 NFL Draft.

“I think it was a decision for my family. I want to be able to do stuff for my family that I couldn’t in the past. At Coastal, I came in and did what I wanted to do. Even though we didn’t get a chance to play for the Sun Belt Championship, we had some major accomplishments this year. We took a major step for the program, and it should be something that solidifies that program being very good for years to come.”

Jackson was a two-time team captain and a star in the classroom, too.

He was also heavily involved in the community, having worked with numerous charities and events over his time at Coastal Carolina including volunteering at events such as Tim Tebow’s “Night to Shine” Prom, Caring for Kindergartners, Black History Month Program, pumpkin drives, and Christmas events. Also serving on the leadership team of Fellowship of Christian Athletes (FCA) at CCU.

Says his coach Jamey Chadwell: “Tarron is a selfless teammate who always puts others first. He is humble and always credits his team for his personal accomplishments. He leads by example and treats others with dignity and respect. He is a shining example of a student-athlete.”