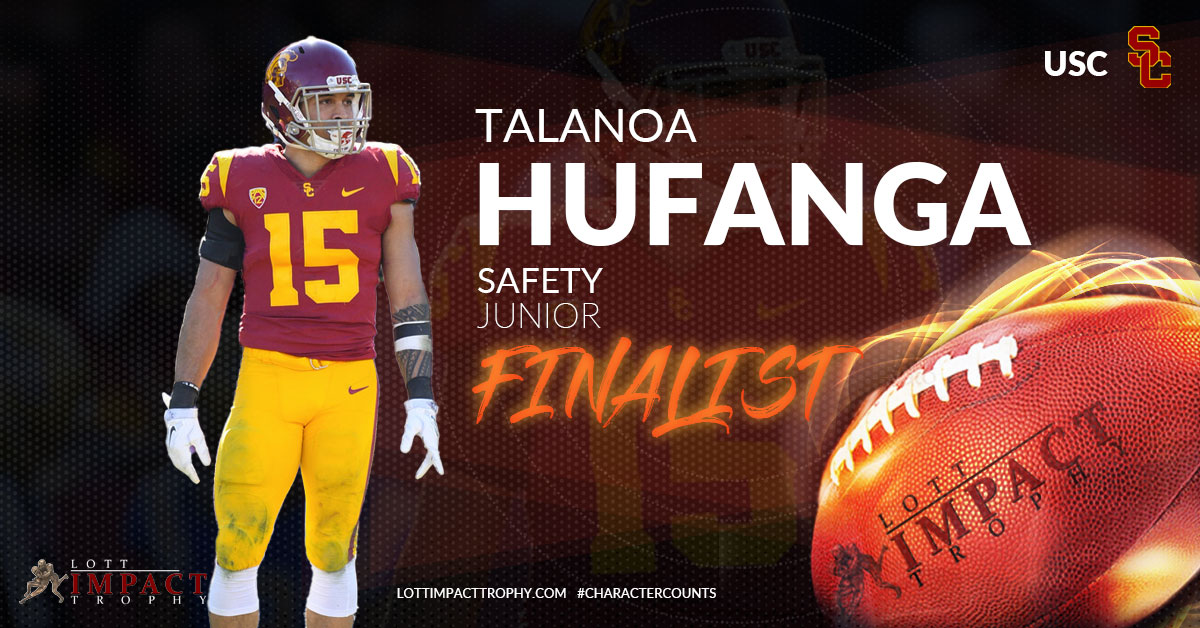 USC Head Coach Clay Helton calls Talanoa Hufanga “one of the smartest players I’ve ever had the opportunity to coach” and “such a great playmaker.”

The strong safety put together a first-team All-American season in his junior year, finishing as the 2020 Pac-12 Defensive Player of the Year. He ended the season leading the Trojans in tackles (62), interceptions (4), and forced fumbles (2). He also tallied 5.5 tackles for loss and three sacks. He led the conference in interceptions and ranked third in tackles.

The ‘Tongan Tiger,’ as he’s been nicknamed, grew up on his family’s farm in Corvallis, Ore. and played multiple sports growing up. He entered USC as an early enrollee in the Spring of 2018 having just been named the inaugural Polynesian High School Player of the Year.

As a true freshman, he played in eight games – five as a starter – before a broken collarbone put a premature end to his freshman campaign. As a sophomore, he started in all 10 games in which he played.

Hufanga has been a frequent participant in community service opportunities coordinated by Angela Helton, Coach Clay Helton’s wife, namely spending time with homeless youth at Safe Place for Youth and My Friend’s Place. He also helped renovate an apartment for victims of domestic violence through Trojan Outreach while at USC. “It’s a good opportunity to just get out and engage with other people that you’re not around everyday,” Hufanga has said of the outreach.

“He is an exceptional person and a role model,” said Coach Helton of Hufanga. “On the field, he is an aggressive warrior, but off the field he is one of the most gentle and kind people you could have the pleasure of knowing.” His position coach, Craig Naivar, calls Hufanga a “tremendous player, teammate and young man.”

The safety is the third Lott IMPACT Trophy finalist from USC, following Devon Kennard (’13) and Adoree’ Jackson (’16). After three seasons with the Trojans, Hufanga has declared for the 2021 NFL Draft. He ends his career having played 24 games in Cardinal and Gold with 129 solo, 203 total tackles, 16.5 TFL – including 6.5 sacks, four interceptions, 12 pass deflections, and four forced fumbles.