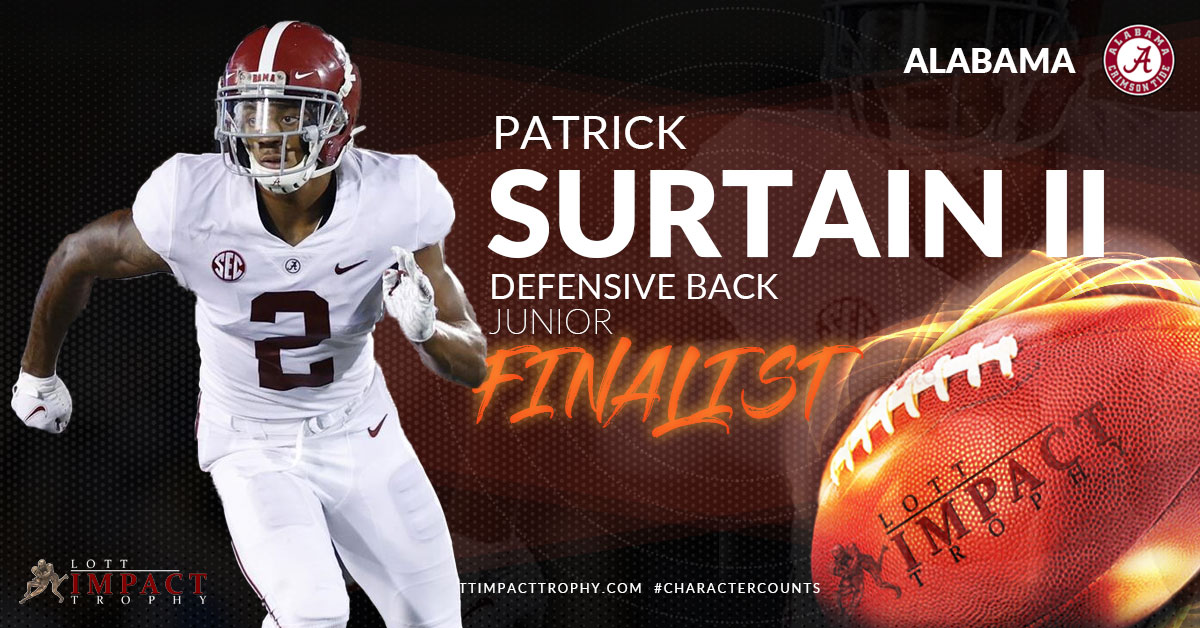 The unanimous first-team All-American has been a constant impact player for the Crimson Tide, playing in every game of his Alabama career and making 37 consecutive starts. Surtain finished the 2020 season with 35 tackles, 2.5 tackles for loss, 11 passes broken up, one fumble recovery, two quarterback hurries, and his first career pick-six. He added three tackles, a tackle for loss, and a deflection in the 2020 National Championship game.

The SEC Defensive Player of the Year allowed 25 yards receiving or fewer in nine of 12 games and was targeted just 45 times all season, allowing only 19 completions for 256 combined yards and just one touchdown. It’s no wonder that he’s Pro Football Focus’ highest-graded FBS cornerback.

Surtain II was also frequently selected the team’s defensive MVP by the Alabama coaching staff. Alabama Head Coach Nick Saban applauded the junior for leading by example, saying, “I think he’s not really a vocal guy, but in a quiet way impacts everybody in a very, very positive way because of the example that he sets.”

“He is somebody that I wish every guy on our team would try to emulate in terms of the character that he has as a person, and the competitive character he demonstrates every day in preparing for a game, as well as how he plays in a game,” Saban said.

The Rose Bowl Defensive MVP is also a finalist for the Thorpe, Bednarik, and Nagurski awards. He ended his 2020 campaign hoisting the National Championship trophy in the same stadium his father used to call home as a three-time Pro Bowl cornerback for the Miami Dolphins.

Surtain II becomes the sixth Alabama athlete to be named a Lott IMPACT Trophy finalist following Trophy winner DeMeco Ryans (’05) and finalists Rolando McClain, (’09), Dont’a Hightower (’11), Landon Collins (’13) and Jonathan Allen (’16). He finishes the 2020 season a projected first round NFL pick should he decide to prematurely finish his career as a member of the Crimson Tide.