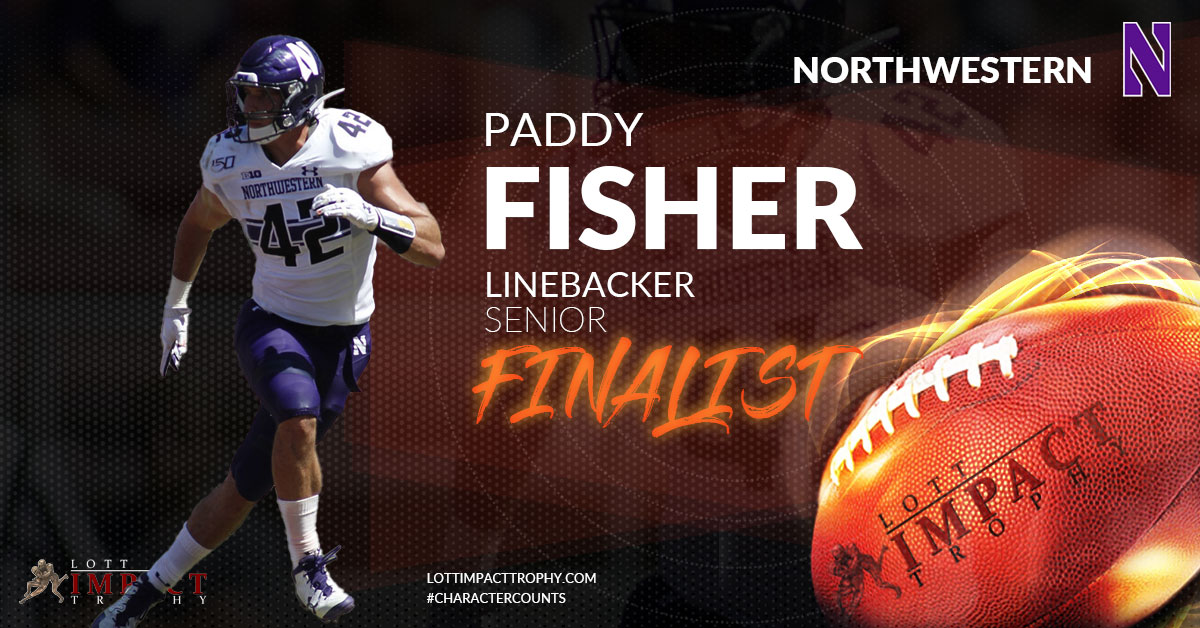 A three-year team captain at Northwestern, Paddy Fisher is the NCAA’s active leader in career tackles (392) and forced fumbles (11).   The redshirt-senior linebacker is a two-time All American, a perennial Academic All-Big Ten member and this year was named the recipient of the Big Ten’s Fitzgerald-Butkus Linebacker of the year, a first for the Northwestern program.

With the exception of a disappointing 3-9 campaign in 2019, Fisher has been a large part of Northwestern’s recent success. While a member of the Wildcats, Fisher was a part of three bowl wins, two Big Ten West championships and a ten-win season, all while wearing jersey number 42. This year, the Wildcats defeated Auburn in the Citrus Bowl where Fisher had a team high twelve tackles, one for a loss, and made a key stop on a 4th-and-1 in the fourth quarter.

In his career, Paddy Fisher has compiled over 400 career tackles, becoming the 6th Wildcat ever to reach that milestone. In addition, Fisher totaled 23.5 tackles for a loss, 12 forced fumbles and four interceptions over the course of his four years playing at Northwestern.

Fisher’s impact was felt immediately by the Wildcats when he picked off the first pass of his career. As a freshman he led all first year FBS players in tackles (113), led the Big Ten with four forced fumbles, was named Freshman All-America, and was named Big Ten Defensive Freshman of the Year.

Fisher’s teammate, and fellow-linebacker Blake Gallagher, cites Fisher is a big reason for while he chose to go to Northwestern, saying, “Paddy’s a natural-born leader, an all-class type of guy, someone guys want to be around”

Before arriving at Northwestern, Fisher was a three-star high school prospect from Katy, Texas. Today, the 6’4”, 240-pound linebacker is the 15th ranked linebacker by Mel Kiper heading into the 2021 NFL Draft.