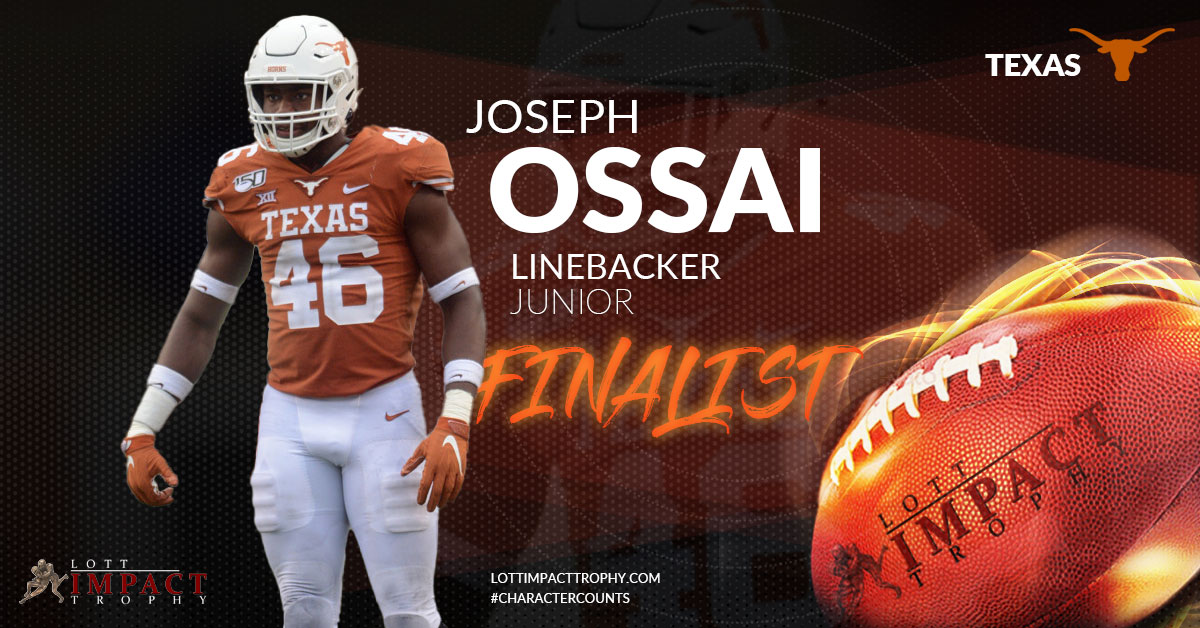 The University of Texas has always had a presence on the Lott IMPACT Trophy.  Beginning in the first year of the award in 2004 when Linebacker Derrick Johnson was a finalist (to winner David Pollack of Georgia) Texas players have been recognized as top candidates for the Lott. There was Brian Orakpo in 2008, Sam Acho in 2010 and Emmanuel Acho in 2011.

But there has yet to be a Longhorn winner.

Enter Joseph Ossai, a finalist this year and one of the top players in the nation.

His 16 tackles for loss led the Big-12 and he was a consensus All-America, being named on five different outlets.

Against rival Oklahoma, Ossai skyrocketed onto the national scene with a 12-tackle, 6 tackle for loss dominance.

His head coach at Texas, Tom Herman, says: “This is a dude that literally has two speeds: off and full. That’s it and he is ‘full’ most of the time. He’s fun to watch and he will have a special place in my heart and, hopefully, in all of Longhorn fans’ hearts for a long time.”

But he is more than a gifted football player and fits the Lott Trophy’s call for excellence on and off the field.

Krista McKenney, the senior academic coordinator for football at Texas, says: “I Know you will be hard pressed to find a more deserving recipient (of the Lott Trophy).  I have never seen Joseph pass up an opportunity to develop personally or professionally.”

Adds Kevin Goodwin, one of his coaches at Aldine Eisenhower High School: “He was honest, direct and informed (during the recruiting process). There is no other player nominated that has the characteristics of this young man. He is the biggest grand slam award nominee that I have ever coached.  He will represent the legacy of Ronnie Lott with dignity and honor.”