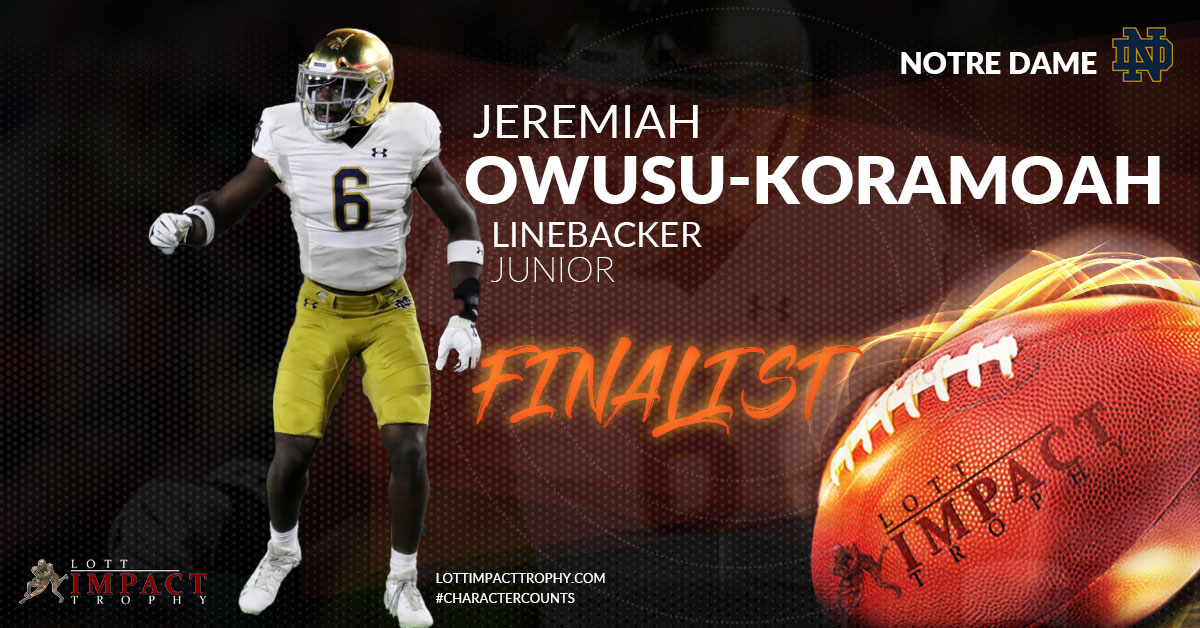 Notre Dame’s Jeremiah Owusu-Koramoah is a consensus First Team All-America linebacker and projected first round NFL draft pick. Owusu-Koramoah won the 2020 Butkus Award, given annually to the top linebacker in college football and was named ACC Defensive Player of the Year.

This past season, Owusu-Koramoah made 62 tackles and led the Irish with 11 tackles for a loss. Additionally,he had an interception, forced 3 fumbles, and recovered two, including one for a 23-yard touchdown in Notre Dame’s win over Clemson. After that game against the Tigers, Owusu-Koramoah was named the National Player of the Week.

When asked about Owusu-Koramoah, Notre Dame Head Coach Brian Kelly said “He brings his best against the best. I think that’s how you measure great players is at what level do they play.” Kelly continued, “Competitive greatness is always measured about how the great players play their best against those types of teams and I think that’s where we started to see his separation and ascension as a football player.”

When it comes to leadership Owusu-Koramoah’s teammate, Paul Moala, added, “Even when he comes off the sidelines, he’s always watching me and making sure I do everything right.” Moala added, “Just to have that role model and leader guide me when I make mistakes is really good to have.”

Owusu-Koramoah will not return to Notre Dame next season, after declaring for the NFL Draft on Monday, January 4. ESPN’s Mel Kiper projects him as the number 1 linebacker and ninth on his overall “Big Board.” In a statement on social media, Owusu-Koramoah said, “I won’t cry because it’s over, I’ll just smile because it happened. Thank You, Notre Dame.”